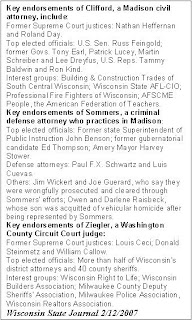 An interesting question before tomorrow's primary is why the Pro-Life Wisconsin Victory Fund (PLWVF) PAC endorsed attorney Joe Sommers over Annette Ziegler. Despite the ravings of one blogger, the answer is really quite simple, and was easily found out with a phone call to Pro-Life Wisconsin's Legislative Affairs Director Matt Sande. The simple answer is that Annette Ziegler apparently did not seek PLWVF's endorsement, and did not respond when the PLWVF attempted to ask the candidate about her views. Joe Sommers, on the other hand, was a known quantity to Pro-Life Wisconsin, is outspokenly pro-life, was responsive to the PLWVF's board, and lives by a pro-life philosophy.

Ziegler's campaign manager Mark Graul did speak with Matt Sande last week, and Sande said he was assured Ziegler is a strict constructionist. However, Sande pointed out the Pro-Life Wisconsin Victory Fund would be unable to continue the process to determine if they should endorse Ziegler without being able to question the candidate. Sande said, "the door is always open."

A couple of other tidbits.

This is the second statewide race in a row for Republican campaign manager Mark Graul where the candidate did not seek the Pro-Life Wisconsin Victory Fund endorsement. Last election cycle it was former Congressman Mark Green's campaign for governor. (Mark Graul did not return my call.)

The Pro-Life Wisconsin Victory Fund did receive a response from Linda Clifford, who declined to state her views on abortion saying it would be "inappropriate." No word why the other interest groups would be more appropriate.

Update! I forgot I wanted to add WVCY's interviews with the three candidates can be found at their website.