No sense of humor

Local conservative bloggers have been having a little fun with Alderman Larry Nelson's election as Mayor of Waukesha. Mike at Spring City Chronicle laughs, laughs, laughs and laughs. Chris at Spotted Horse joined in the fun, too.

One of the leading blogs on the Left, on the other hand, answers that age old question, How many liberals does it take to screw in a light bub? "That's not funny."

...McIlheran laid out the battle-plan for their response once Wisconsin voters overwhelmingly favored bringing American soldiers home from the civil-war-to-be that is Iraq. His plan had several elements (paraphrasing):
1.The referenda don't mattter, since they're advisory

2.The only voters in a low-turnout election are fringe activists
3.The real people behind the referenda are commies (who also seem to have elected themselves a mayor, according to Wigderson) and people who want failure in Iraq...

The post to which Jay is referring is this one:

I have in my hands a press release supposedly from Mayor-elect Larry Nelson. It announces the renaming of city hall. Henceforth, The City of Waukesha Common Council will meet in The Kremlin.

This was obviously intended as a joke. I know Nelson isn't really planning on renaming city hall.

However, I am concerned about the new logo proposed for Waukesha: 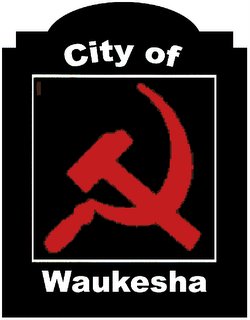 Update! Jessica McBride has seen one of my favorite movies.
Posted by James Wigderson on April 06, 2006