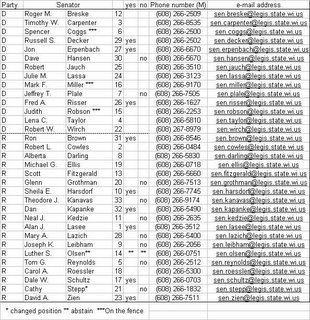 My guest opinion column on the proposed ethanol mandate appears in the Waukesha Freeman today.

Tomorrow, the State Senate Committee on Agriculture, and Insurance will take action on the bill. The chairman is Senator Kapanke, who is in favor of the bill. Senators Kedzie, Brown, Olsen, Erpenbach, Hansen, and Miller are them members. Brown and Erpenbach are in favor of the bill. Hansen and Kedzie are opposed. Olsen is forced to abstain. Mark Miller of the 16th district is the wild card.

Republicans on Friday cut a deal with the Sierra Club and Clean Wisconsin to get them to support the deal. The DNR will be granted extra powers to offset the pollution caused by the ethanol mandate, setting the precedent that other industries will pay to clean up someone else's mess.

State Senator Neal Kedzie, chairman of the State Natural Resources committee, also reacts to the flip-flop of the Sierra Club and Clean Wisconsin:

“Just eight days ago, several of the groups who hold themselves out as the protectors of Wisconsin’s environment expressed their strong opposition to the ethanol mandate bill (Assembly Bill 15 – AB 15), yet today it was announced those groups have flip-flopped on the issue,” said State Senator Neal Kedzie (R-Elkhorn). Kedzie continued, “The Sierra Club and Clean Wisconsin have a longstanding reputation of looking out for Wisconsin’s natural resources. Yet, those groups have agreed to give the ethanol industry a free pass. I am disappointed that the leaders of these groups have let down all Wisconsin residents by abandoning our environment on this issue.”

Kedzie pointed to a study released by the Department of Natural Resources (DNR) that firmly declared ethanol would be harmful to air quality in the state. One portion of the study revealed that an ethanol mandate in the state will increase pollution “twice as much as the NOx decrease (the clean air benefits) of the current motor vehicle inspections and maintenance (I & M) program in Southeast Wisconsin.” Kedzie said he is puzzled why groups that have fought long and hard for I & M, at the expense of area taxpayers would now allow that progress to be undone.

The good news is, if they pass the amended version it still has to go before the whole state senate and then back to the state assembly. The bad news is, there's a strong chance of it getting past those hurdles. Better to try to kill the bill now.
Posted by James Wigderson on January 30, 2006